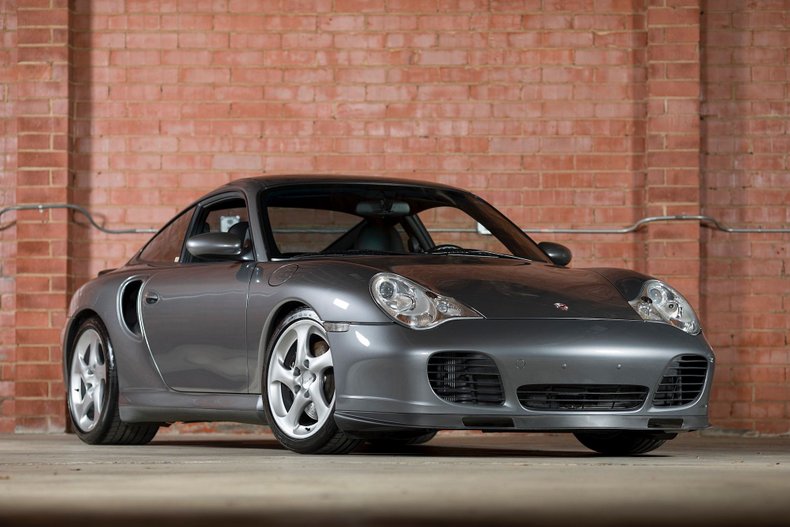 The 996 Turbo debuted at the Frankfurt Auto show in September 1999 and went on sale in the US in summer of 2000 as a 2001 model. The Turbo is powered by a water-cooled twin-turbocharged and intercooled 3.6-liter flat-6 engine derived from the 1998 Le Mans winning 911 GT1 race car. The engine is rated at 414 hp at 6,000 rpm and 415 lb⋅ft of torque. It features an all-wheel drive system and was available with either a 6-speed manual or a 5-speed Tiptronic transmission. It has revised styling and a wider stance than the naturally aspirated 996 Carrera models, along with new bi-xenon headlamps and a fixed rear wing. The Turbo also came with VarioCam Plus and stability management, and an electronically adjustable rear spoiler was included which would rise at a speed of 76 mph and lower at 36 mph. The bodywork was also revised to allow airflow to 3 radiators up front and to accommodate 18-inch wheels and tires.

This Turbo emerged from Zuffenhausen at the beginning of May, 2002 destined for Dallas, Texas. Making its way west to Southern California in 2007, the car would reside in Orange County for the next decade until its seller purchased the car from the reputable Southern California Porsche experts at Auto Kennel in 2017.

During its previous ownership the car was gifted several high end components, from GT2 K24/18G turbochargers to KW Variant 3 adjustable coilover suspension. Work was carried out by some of the best in the Porsche business, to include BBi Autosport, credited for building some of Jeff Zwart's Pikes Peak creations. Some of the other work includes:

During the past three years the car's seen considerable service in addition to schedule maintenance, to include front wheel bearing replacement, front CV boot replacement, throttle body and oxygen sensor replacement. A low speed driveway bump up resulted in bumper cover replacement and driver-side fender repair, otherwise all paint measures factory depths. The nose of the car and other vulnerable areas have been covered in 3M paint protection film to help keep paint in nice order. Additionally, as is typical with these cars, the hydraulically-operated doesn't currently function, and is currently in the fixed down position.