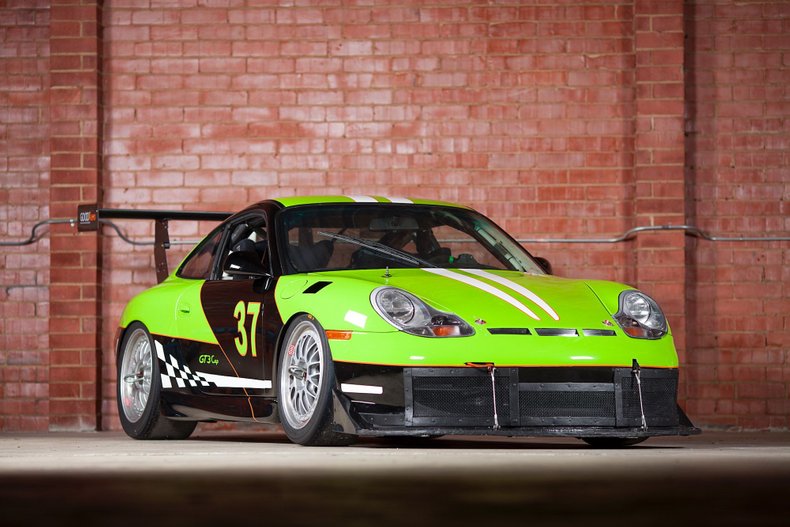 The Porsche 911 GT3 is a high performance version of the Porsche 911 sports car primarily intended for racing. It is a line of high-performance models, which began with the 1973 911 Carrera RS. The GT3, introduced in 1999, is named after the Fédération Internationale de l'Automobile (FIA) Group GT3 class, in which it was designed to compete.

The GT3 has had a successful racing career in the one-make national and regional Porsche Carrera Cup and GT3 Cup Challenge series, as well as the international Porsche Supercup supporting the FIA Formula 1 World Championship. It has won championship and endurance races, including the GT class of the American Le Mans Series seven times, first overall in the 24 Hours of Daytona, and first overall at the 24 Hours Nürburgring six times.

Following its departure from Porsche Motorsport in Weissach, Germany, this GT3 Cup was purchased by Martin Flitton Racing in Newbury, England where it would be campaigned in the single marque Pirelli Supercup series that supported the Formula 1 race calendar. Originally dressed in the familiar Biarritz White, chassis 54 would go on to share pavement with now prominent names like the young Jörg Bergmeister, Marco Werner, Wolf Henzler and Sascha Maassen in the 2001 season before it was eventually retired for amateur use.

Most recently purchased from the previous owner with 212 hrs total run time and 11,251 miles, chassis 54 was fitted with a new, higher output PMNA-sealed 997 3.6L engine. Impressively, the original engine was still in service at 212 hours, but for reliable use, the decision was made to replace with a new, fresh unit. At the time of purchase, the new power plant showed only 1 hour use + dyno time at PMNA (Porsche Motorsport North America). The 6-speed manual transaxle also showed only one hour use following a rebuild from Porsche gearbox specialist, GBox of Erie, Colorado. The GT3 Cup was described to have escaped any major shunts during its professional career and it's described to still utilizes its original tub.

Fast forward to today the GT3 Cup has been enjoyed by an ex-General Motors safety engineer who has used the car exclusively for open track events with the Porsche Club of America. With the help of Porsche Cup car specialists, the car has underwent some modifications to aid aerodynamics, safety and performance. A total of 5,600 miles were accrued during the seller's ownership and during that time the following was completed:

Along with these items, the car was fastidiously maintained with constant intense inspections, fluid changes and replacement of necessary wear components, all notated in log book/notes provided in the sale. The seller took a no-expense approach to maintenance and the $43,000 worth of receipts during his owsnership are surely evidence to this.

Shortly after purchase the engine was dynoed by Autometrics Motorsports and made a maximum output of 381hp/265lb-ft at the wheels on a hot July afternoon in Charleston, SC. Current engine compression and leak down measurements reveal compression ranging from 210-215psi with leak down from 5-7%.

Included in the sale of this GT3 Cup are the following: