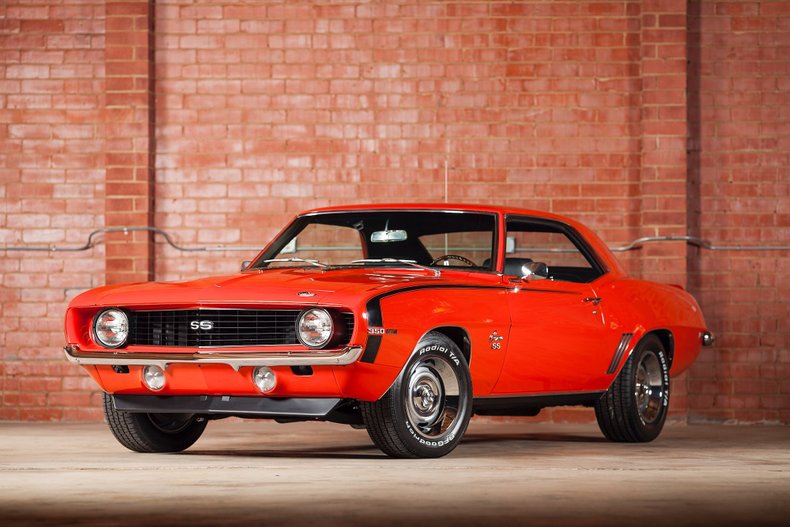 The first-generation Chevrolet Camaro debuted in September 1966, for the 1967 model year, up to 1969 on a new rear-wheel drive GM F-body platform and was available as a two-door coupe or convertible with 2+2 seating, and a choice of inline-6 or V8 powerplants. The Camaro was touted as having the same conventional rear-drive, front-engine configuration as the Mustang and Chevy II Nova. In addition, the Camaro was designed to fit a variety of power plants in the engine bay. The first-generation Camaro lasted until the 1969 model year as offered here and eventually inspired the design of the new retro fifth-generation Camaro.

Little is known about the car's history before the seller purchased the Camaro in 2007. According to the cowl tag, this 1969 Chevrolet Camaro left the Norwood Fisher Body plant in Ohio originally painted LeMans Blue with a black interior and equipped with a V8.

Now painted in attractive Hugger Orange, the Camaro has lived a charmed life over the last 12 years while sharing space in a climate-controlled garage with a Shelby Mustang GT500. While it used to wear Foose Custom wheels (note: also available), the Camaro was recently outfitted with new BF Goodrich Radial T/A tires and the timeless Rally wheels.

A visual inspection of the Camaro shows a high-level of quality in the fit and finish of the paint and body materials, with no surprises or question marks. As shown in the pictures, scrutinizing the undercarriage brings the same level of comfort.

The 350 cubic inch Chevrolet V8 engine fires up on the first crank, settling into a lopey idle improved by the long-tube headers. After snicking the Hurst shifter in first gear, the Muncie transmission comfortably shifts through its four speeds with no grinding of gears or anything of note.

With power steering and power brakes, coupled with a front disc brake conversion, the Camaro is more than equipped to handle the hefty power generated from the burbling Chevrolet V8 engine. The Autometer water temperature and oil pressure gauges attest to its condition as well.

A review of the interior also brings satisfaction, as there are no tears in the attractive black houndstooth seats or cracks in the dash.

The Camaro was serviced in April 2019 by a marque specialist, including the following:

This 1969 Chevrolet Camaro is more than ready to be enjoyed across a range of driving experiences. It's available for inspection at our climate-controlled garage in Charlotte, North Carolina. As always, pre-purchase inspections are strongly encouraged.