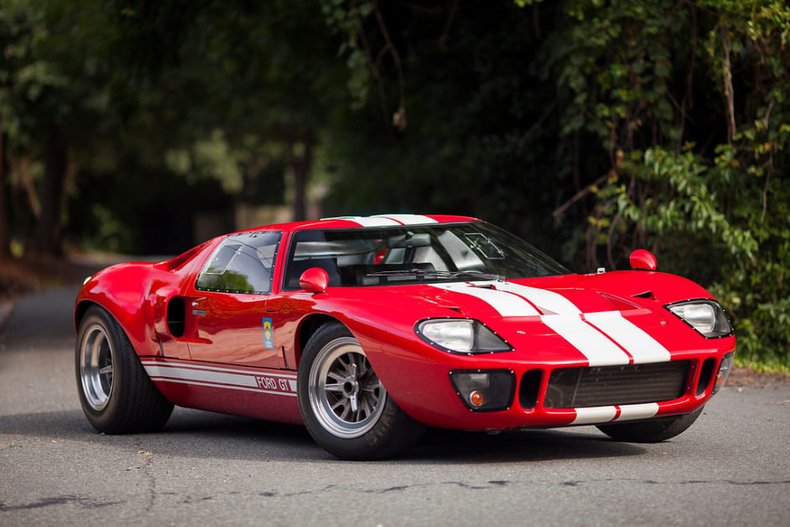 Since last year we've been celebrating the 50th anniversaries of Ford's triumphant domination at the 24 Hours of Le Mans, so what better time to get behind the brand that handed Ferrari their lunch following a corporate acquisition gone sideways? The car on offer pays tribute to the original Mk IB Ford GT40, a very faithful recreation assembled by ERA.

Completed on February 1992, chassis 2002 was originally owned by an individual that today owns one of the 10 original Ford “J-cars” that saw use as the famous GT40 Mk IV and the G7A Can-Am car. Unlike many recreations and replicas, this car was completed through ERA themselves to ensure that the finished product had an impressive enough fit and finish to be a show car for their company. Generally agreed as one of the most accurate GT40 recreations, ERA has been around for decades and is said to offer a very high level of customer support.

Eventually purchased in 2006 by the seller, a Sports Car Digest reader, that has quite the history himself. A dyed-in-the-wool Ford guy, Tom Monroe went to work for Ford as a Chassis Engineer in the late '60s, which would eventually turn into a position at Kar Kraft (The engineering firm that helped carry out Ford's Le Mans winning GT program, as well their Trans-Am, NASCAR, NHRA and Can-Am programs). Following this, Monroe would help start AVC Engineering, which would eventually turn into Protofab, the company that would carry out everything from a Greenwood Corvette to a the Roush Trans-Am Mustangs of the '80s.

Chassis 2002 is unlike many GT40 replicas in that it uses a semi-monocoque structure, like the originals. Unlike the original, which used a cold-rolled steel, ERA uses a urethane coated mild steel and carbon/kevlar roof, as opposed to the original's steel structure. The bodywork is a welcome surprise, with fit and finish that is described as better than the originals.

The small-block, Ford V8 was built through ERA and using a Ford SVO (Special Vehicle Operations Dept.) 302 block, bored out to 331 CI. The goal with the engine build was to provide around 400 horsepower yet offer a useable power band for street use. Power is sent through a ZF 5D5-25/2 5-speed manual transaxle, similar to the unit used in the original Mk1 GT40. The gearbox was recently rebuilt by specialist, Guy Trigaux of GTM & Son, LLC.

The suspension design on ERA's GT is strikingly similar to the original car and uses their own Aluminum/Magnesium alloy uprights, fitted to jig-welded, tubular control arms that use high quality spherical joints where appropriate along with nylon-lined rod ends. Spax adjustable coilover springs and dampers are used on chassis 2002 and the ride height is set to a reasonable level for real world street use.

One area ERA has improved upon the original GT40 is slowing it down. Chassis 2002 uses more modern brake calipers borrowed from Chevrolet's “C4″ Corvette that clamp down on the 11.5/11.75″ brake rotors. Like the original, the braking is unassisted but the use of modern production car calipers offers inexpensive and accessible wear parts. Sticky Avon CR6-ZZ rubber provide the necessary grip and the appropriate look when wrapped around the staggered, 15” Trigo pin-drive Halibrand-style alloy wheels with knock-offs.

Chassis 2002 has been enjoyed on the road and the track during the decade that the seller has owned the car. Through this, he has sorted the car and the result is what's described as a very reliable, track-ready machine.