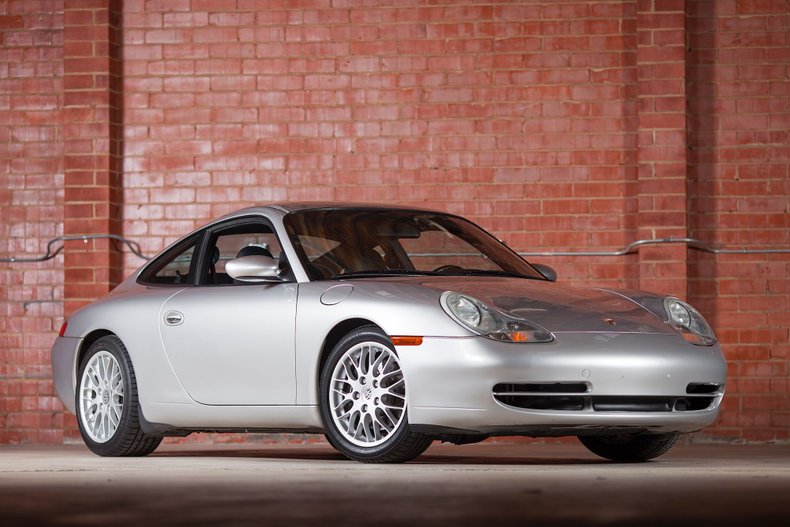 *Classic Arctic Silver Metallic on Black leather
*Well-maintained, enthusiast-owned example of a Mk 1 996 Carrera 2
*Two southeast owners from new, documentation from day one
*Lightly modified with LN IMS retrofit completed
*A 911 for everyday use
*Available for immediate inspection at our Charlotte, NC office

The Porsche 996 is the internal designation for the Porsche 911 model manufactured between 1998 and 2004. The 996 had little in common with its predecessor, with the first new chassis platform since the original 911 and a new water-cooled engine. Technically, it was a major change, a complete breakaway from the original car other than overall layout.

At its debut, the 996 featured the most significant change from the classic 911 series: a water-cooled engine replacing the previously air-cooled engine. Progressively stringent emissions and noise regulations, environmental concerns, a higher expectation for refinement and a high-performance 4 valve per cylinder engine made the switch necessary. Other major changes include a completely new platform having a body with a more raked windshield and re-designed interior.

We have known this car from new, from when it was originally purchased from Paramount Porsche in Hickory, NC, where it's spent its time between two long-term PCA members to this day. The 911 was traded into the same Porsche dealership by the original owner in 2004, who would go onto purchase another Porsche, and the Carrera coupe was later purchased by its current owner. The car was enjoyed with care and even saw use in various Porsche Club of America HPDE and Drivers Schools, always under the expert care of the same senior technician that worked on the car from new.

The Carrera coupe was ordered with a fairly standard configuration, as the original owner favored the minimalistic "sports purpose" 911s of years past and the GT3 that it predated in the US. Shortly after the car was delivered it would have a Rest-of-World "M030" Porsche Sport Suspension kit fitted, followed by some additional high quality modifications:

Crucially this 911 had its intermediate shaft (IMS) bearing replaced the LN Engineering retrofit in 2013 and at the same time the clutch, flywheel, rear main seal and air oil separator (AOS) were all replaced. All sheetmetal on this car retains its original paint, though bumpers were refinished due to wear and tear over time. As evidenced in images, there are some scratches along the underside of the front spoiler and a small indention on the passenger rocker panel. Additionally, there is light stone chipping/peppering on forward facing surfaces commensurate with the age and use.

As die-hard air-cooled Porsche fans, we understand the appeal, but can't ignore the tremendous value that nice water-cooled 911s represent. This is a 911 that one can enjoy daily in any environment.