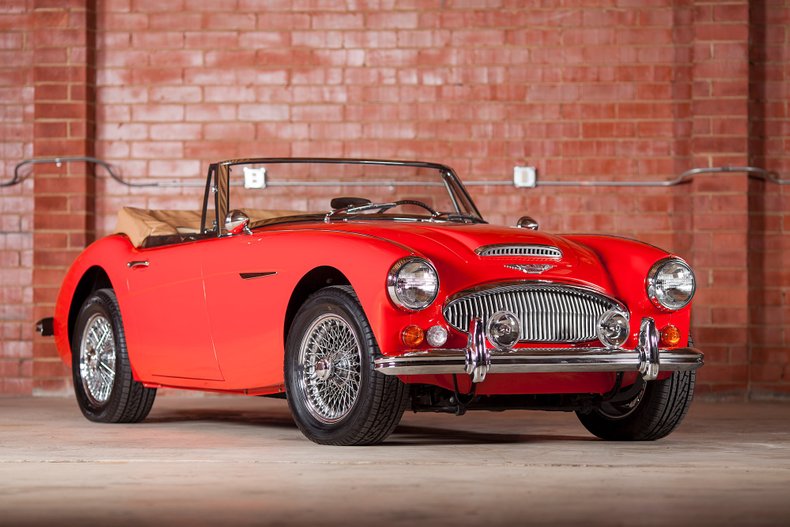 The Austin-Healey 3000 is a British sports car built from 1959 to 1967. It is the best known of the "big Healey" models. The car's bodywork was made by Jensen Motors and the vehicles were assembled at BMC's MG Works in Abingdon, alongside the corporation's MG models. During its production life, the car transitioned from an open sports car, albeit with a child-transporting 2+2 option, to a sports convertible.

The 3-litre 3000 was a highly successful car, which won its class in many European rallies in its heyday and is still raced in classic car competitions by enthusiasts today.

The 3000 sports convertible Mark III was announced in February 1964 its power increased from 136 bhp to 150 bhp by a new higher lift camshaft. SU HD8 carburetors replaced HS6 units increasing the choke size from 1.75 to 2 inches. Power-assisted braking became standard instead of optional. The new car's fascia displayed its speedometer and tachometer directly in front of the driver.

The Mark III BJ8 remained in production until the end of 1967 when manufacture of Austin-Healeys ceased.

This example was purchased by the seller 30 years ago from an Austin-Healey enthusiast and was described as a "driver-quality" example at this point. The seller's intent was to eventually restore the car, which finally took place in 1999. Over the year the 3000 would undergo a comprehensive rehabilitation, rebuilding mechanicals and going down the metal to make any necessary metal repairs before renewing exterior and interior finishes. Thankfully, the restoration process is well-documented through photos, notes, receipts and gives an in-depth look at the lengths required to properly restore a half-century old British sports car.

Today the car sees light use, and is taken out for nice weather and shows. The Healey underwent a major service near the end of 2016 that involved work on the carburetor, distributor and braking system. The following work was carried out by English car specialist, The Flying Circus. More recently, new tires were recently fitted on all corners and earlier this year an engine oil/filter service completed. A recent engine compression and leakdown test revealed strong numbers, corresponding to the low mileage on the rebuilt engine. (Engine compression shows 160-175 psi with 3-5% leakdown)

This BJ8 drives brilliantly today and is available for immediate inspection at our Charlotte, NC office.