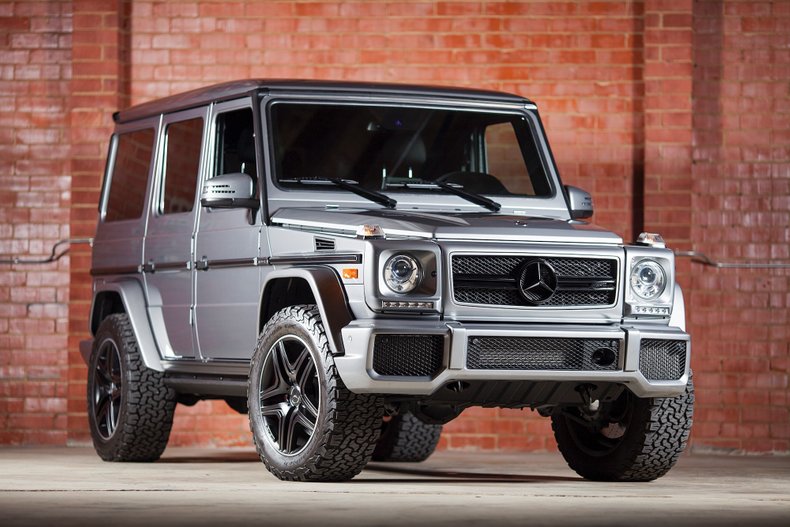 The Mercedes-Benz G-Class, sometimes called G-Wagen (short for Geländewagen, "cross country vehicle"), is a mid-size four-wheel drive luxury SUV manufactured by Magna Steyr (formerly Steyr-Daimler-Puch) in Austria and sold by Mercedes-Benz. In certain markets, it has been sold under the Puch name as Puch G. The G-wagen is characterised by its boxy styling and body-on-frame construction. It uses three fully locking differentials, one of the few vehicles to have such a feature. Despite the introduction of an intended replacement, the unibody SUV Mercedes-Benz GL-Class in 2006, the G-Class is still in production and is one of the longest produced Mercedes-Benz in Daimler's history, with a span of 35 years. Only the Unimog surpasses it.

The G-class was developed as a military vehicle from a suggestion by the king of Iran (at the time a significant Mercedes shareholder) to Mercedes and offered as a civilian version in 1979. In this role it is sometimes referred to as the "Wolf". The Peugeot P4 was a variant made under licence in France with a Peugeot engine. The first military in the world to use it was the Argentine Army (Ejército Argentino) beginning in 1981 with the military model 461.

It was not available from Mercedes-Benz in the United States until 2002, although this was preceded by a grey-market where even basic models commanded six-figure prices in the 1990s. It was launched in 2002 as the Mercedes-Benz G500 with a V-8 petrol engine and achieved 3,114 sales that year. Not long there after, Mercedes would offer a high performance variant from their in-house tuner, AMG. Beginning with the G55, and eventually with G63 and G65 models.

This G63 is one of the final examples of the original Gelandewagen-based design, famously utilizing solid front and rear axles offering the ability to lock all differentials when necessary. 2019 marks the year Mercedes moved away from the original design and attempted to soften the G-wagen with the use of independent front suspension and other extensive changes. This coveted final version of the W463 AMG G-wagen came smartly equipped when ordered and includes such items as the designo Exclusive Leather Package, Carbon Fiber Trim, 20" AMG Twin 5-spoke wheels in black and heated steering wheel.

Following delivery the truck underwent an extensive process to help give this G63 a more focused aesthetic and make it a more useful machine when the going gets dirty. The following items were completed:

All original items are retained and available, should someone care to revert back to original configuration. This includes the spare tire and carrier, which were removed during photography.