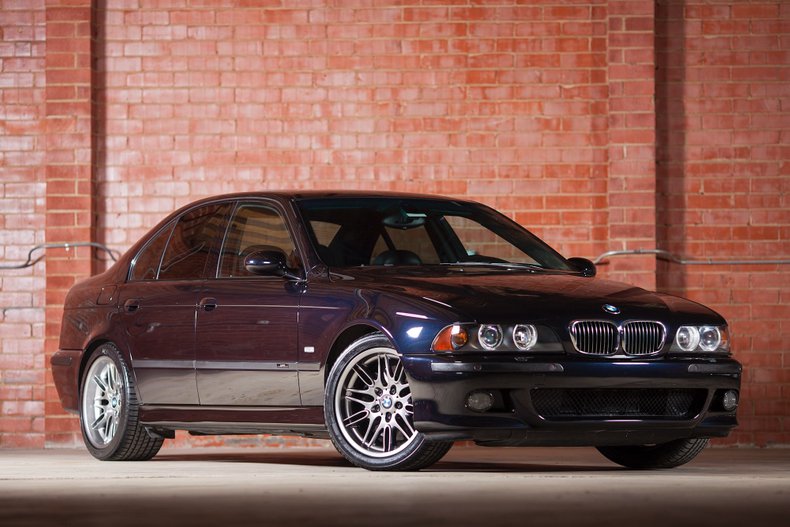 The BMW M5 is a high performance variant of the 5 Series car built by the Motorsport division of BMW. The first incarnation of the M5 was hand-built in 1986 on the 535i chassis with a modified engine from the M1 that made it the fastest production sedan at the time. Versions of the M5 have been built from subsequent generations of the 5 Series platform.

Superlatives abound for the E39 M5:

To many, the 1999 to 2003 E39 BMW M5 is the best sedan BMW's ever built. With its powerful naturally aspirated V8 engine, lovely six-speed manual, and incredible agility all built into a practical and downright gorgeous package, it remains a benchmark even today. - Jalopnik

The E39 generation M5 is on many people's attainable dream car list. The timeless styling, exuberant performance, and sheer fantastic driving experience of the car enabled it to be regarded as one of the best vehicles BMW has ever built. - The Drive

The E39-generation BMW M5, built from 1998 to 2003, has achieved mythical status since it ended production. Even today, this M5 is the sports sedan by which all others are judged, and a lot of enthusiasts would argue that even BMW itself hasn't bested it. - Road & Track

This M5 was sold new in Huntington Beach, California and would spend its days in the greater Los Angeles area until 2018 when it made the trip to North Carolina. Following our purchase we immediately sent the car to BMW specialist, Enthusiast Auto Group for an evaluation and comprehensive service. We then went the extra mile and performed significant reconditioning, taking care of typical trouble spots that occur on BMW's of this era. Everything from the repairing any "depixeling" in interior LCD displays to completely restoring the wheels, there's too much to list. This is not your typical used car.

We're big fans of the E39 M5 and particularly when they've been maintained. Given the exotic nature of these cars, it is very much a "pay now or pay later" situation.