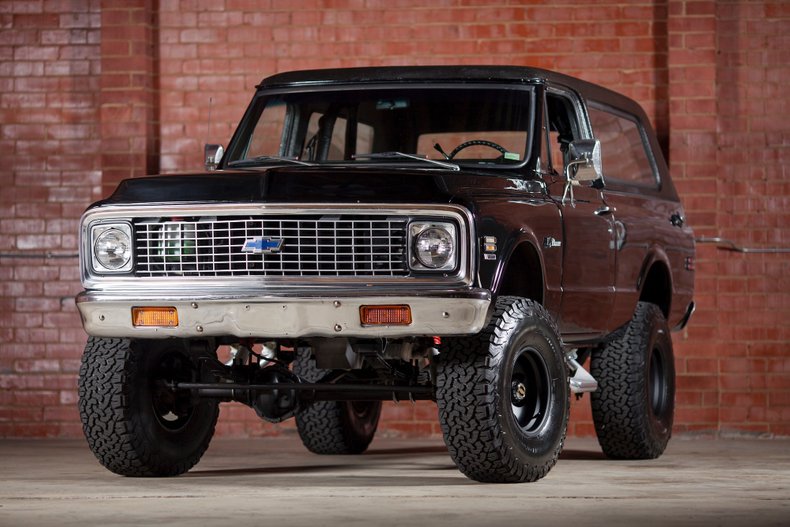 The Blazer was designed and marketed to compete with International Harvester Scout and the Ford Bronco. Both of these were originally aimed at the short Jeep CJ series, which were much smaller than other trucks. The great innovation of the Blazer was to simply offer a shortened pickup truck, which both increased interior space, and lowered the cost of production with a shared platform. The Blazer quickly became popular. For the first time, it married the off-road capabilities of the Scout with the "luxury" features like air conditioning and automatic transmissions routinely available on pickup trucks. By 1970, the Blazer was already outselling both of its older rivals. Ford, Dodge, and even Jeep would counter with similar shortened pickups, with the Dodge Ramcharger and Jeep Cherokee. It also came as a convertible.

This truck started life as a well-optioned and 350CI V8-equipped example originally painted Light Yellow with a contrasting white hard top. The Blazer underwent a lengthy rehabilitation in 2013 that included a color change from the dainty original color to its current black exterior color. During this any necessary metal work was completed to cure typical early K5 weaknesses. The experts at CMD Automotive in Charlotte, NC were contracted to carry out the mechanical work which included a modern, "LS" 5.3L V8 crate engine conversion, as well as the installation of the more current GM 4L60E 4-speed automatic transmission and NP208 transfer case. Warn locking hubs, 4" suspension lift and a disc brake conversion using Wilwood brake calipers were added. Along with this, new wiring harnesses and modern electrical components were used to ensure safe and reliable use.

Originally fitted with the "Four Seasons Air Conditioning" the compressor and associated A/C components have been traded out with newer equipment to improve efficiency. A high-end audio system was added and offers iPod integration using Kenwood and Sony components. There's frankly too much to list on this build and a single $26,000 invoice gives some insight into the level of this build. While it's not an over-restored, $150K Icon restoration, it is a very solid, turn-key example that's ready to be enjoyed.