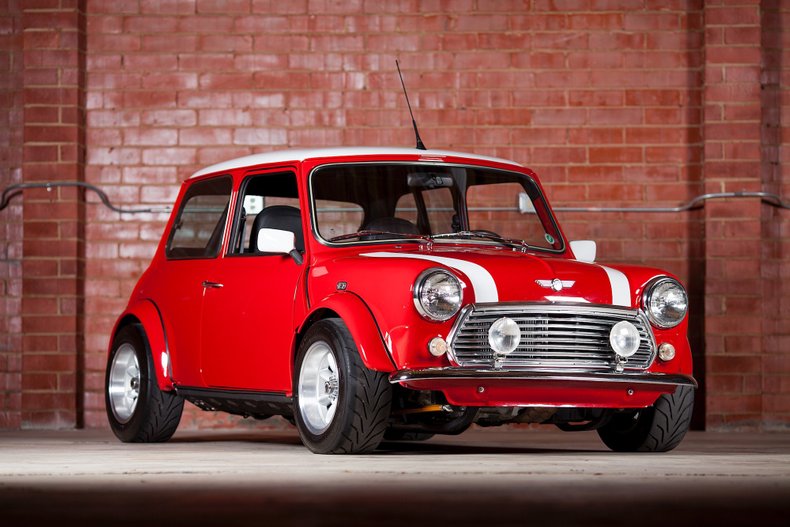 The original two-door Mini was a small car produced by the British Motor Corporation (BMC) and its successors from 1959 until 2000. It is considered an icon of the 1960s, and its space-saving front-wheel-drive layout (which allowed 80% of the area of the car's floorpan to be used for passengers and luggage) influenced a generation of car-makers. The vehicle is in some ways considered the British equivalent to its German contemporary, the Volkswagen Beetle, which enjoyed similar popularity in North America. In 1999 the Mini was voted the second most influential car of the 20th Century, behind the Ford Model T.

This distinctive two-door car was designed for BMC by Sir Alec Issigonis. It was manufactured at the Longbridge and Cowley plants in England, the Victoria Park / Zetland British Motor Corporation (Australia) factory in Sydney, Australia, and later also in Spain (Authi), Belgium, Chile, Italy (Innocenti), Portugal, South Africa, Uruguay, Venezuela and Yugoslavia. The Mini Mark I had three major UK updates: the Mark II, the Clubman and the Mark III. Within these was a series of variations including an estate car, a pickup truck, a van and the Mini Moke—a jeep-like buggy. The Mini Cooper and Cooper "S" were sportier versions that were successful as rally cars, winning the Monte Carlo Rally four times from 1964 through to 1967, although in 1966 the Mini was disqualified after the finish, along with six other British entrants, which included the first four cars to finish, under a questionable ruling that the cars had used an illegal combination of headlamps and spotlights.

This Mini is a little different.

The 1972 Austin Mini we have offered was breathed on by the team at MiniTec, a Georgia-based Mini tuning shop that has been building well executed monster Minis for the past 15 years. Starting with a standard Mini the car was heavily modified with MiniTec's bespoke front subframe enabling the fitment of the modern Honda B18 engine borrowed from the Integra Type R here in the US. Along with quadrupling the output of the Mini, this kit also enables the use of a durable 5-speed manual transmission from Honda, as opposed to the traditional Mini set up where the transmission and engine share the same lubricant.

Perhaps more unusual is that along with the Honda-like reliability and ease of use, this Mini also uses modern air conditioning components to keep you cool in the warmer months. Go find a classic Mini with A/C, much less good A/C!

This MiniTec will be the talk of your local Cars & Coffee events, yet is practical enough to go get groceries in. While you overtake a 911. While getting over 30MPG.