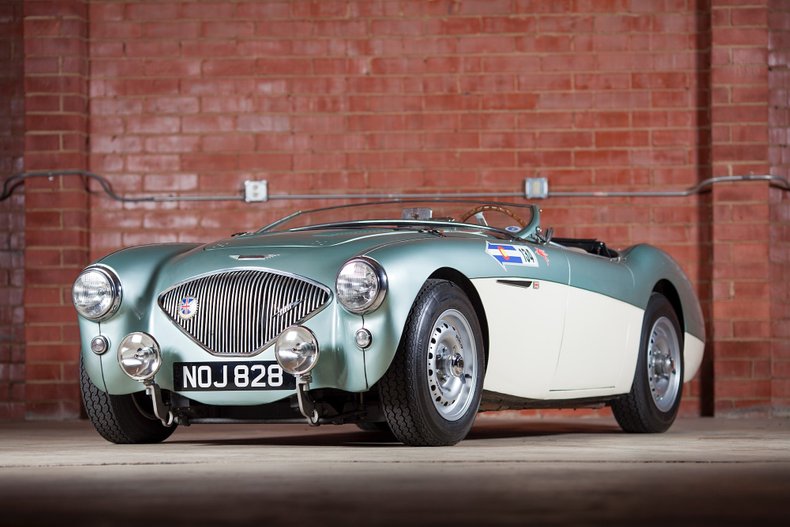 The Austin-Healey 100 is a sports car built by Austin-Healey from 1953 until 1956. It was developed by Donald Healey to be produced in-house by his small Healey car company in Warwick and based on Austin A90 Atlantic mechanicals.

Healey built a single Healey Hundred for the 1952 London Motor Show, and the design impressed Leonard Lord, managing director of Austin, who was looking for a replacement to the unsuccessful A90. Body styling was by Gerry Coker, the chassis was designed by Barry Bilbie with longitudinal members and cross bracing producing a comparatively stiff structure upon which to mount the body. In order to keep the overall vehicle height low the rear axle was underslung, the chassis frame passing under the rear axle assembly.

Lord struck a deal with Healey to build it in quantity, bodies made by Jensen Motors were given Austin mechanical components at Austin's Longbridge factory. The car was renamed the Austin-Healey 100. The "100" was named by Healey for the car's ability to reach 100 mph. The 100 was the first of three models later called the Big Healeys to distinguish them from the much smaller Austin-Healey Sprite. The Big Healeys are often referred to by their three-character model designators rather than by their models, as the model names do not reflect the mechanical differences and similarities well.

The first 100s (series 'BN1') were equipped with the same 90 bhp 2660 cc I4 engines as the standard production A90. The suspension utilised modified Austin A90 components in order to be as cost effective as possible, steering was by Austin's worm and peg system. Front suspension was independent, double wishbone using coil springs and at the rear a rigid axle with semi elliptic leaf springs. A BN1 tested by in 1953 had a top speed of 106 mph and could accelerate from 0-60 mph in 11.2 seconds. A total of 10,030 BN1s were built from May 1953 until replaced by the BN2 model in August 1955.

Recent years have proven a boon to the venerable 100/4. Long overshadowed by the larger and more powerful 100-6 and 3000 roadsters, the four cylinder 100 is once again being recognized for its elegant styling and fine balance. The fact that almost all of Austin-Healey's major racing successes came by way of some iteration of the 100/4 doesn't hurt its reputation either.

This 1955 Austin-Healey 100/4 BN1, chassis BN1L227549, has led a charmed life in the fast lane, first as a long-time race car participating in VSCCA and SVRA vintage races and later on rallies like the Colorado Grand and California Mille.

The previous owner purchased the Austin-Healey in 2010 through Automotive Restorations / Vintage Racing Services. Kent Bain's well-known and respected shop knew the car very well having supported it during its time on the vintage racing circuit.

After purchase, a great deal of time and money was spent to bring the car to its current specification, totaling more than $120,000 in receipts from Automotive Restorations / Vintage Racing Services. Among others, the prior owner did the following as part of the restoration in 2010 - 2012:

While most Austin-Healeys offer spirited performance and enduring aesthetics, this 100/4 provides the added benefits of thoughtful modifications and a brilliant restoration. Combine these with a California Mille, Colorado Grand and Mille Miglia friendly build date of 1955 and this 100/4 is as well suited to the show circuit as it is for high-speed tours.