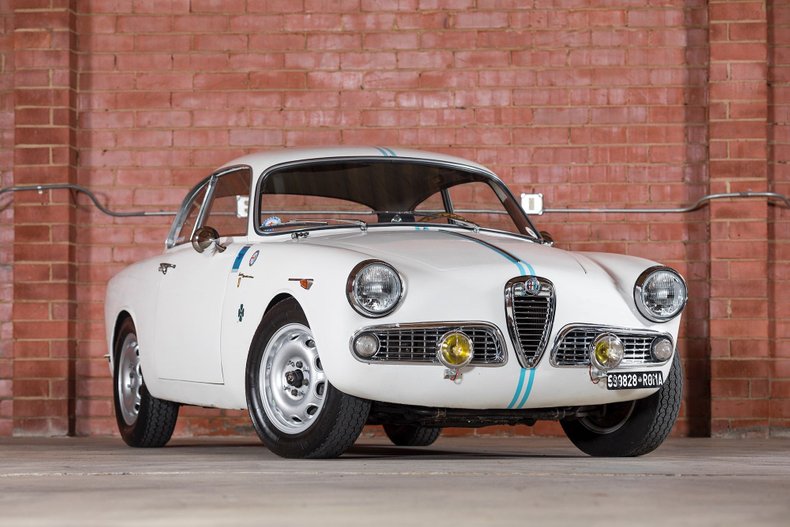 The Alfa Romeo Giulietta (Tipo 750 and Tipo 101) was a family of automobiles made by Italian car manufacturer Alfa Romeo from 1954 to 1965 which included a 2+2 coupe, four-door saloon, estate, spider, Sprint, and Sprint Speciale. The 2+2 was Alfa Romeo's first successful foray into the 1.3-litre class. The first Giulietta to be introduced was the Giulietta Sprint 2+2 coupe at the 1954 Turin Motor Show. Designed by Franco Scaglione at Bertone, it was produced at the coachbuilder's Grugliasco plant near Turin.

* Imported from Italy in 2014 after more than 30 years with Valter Colossi of Brescia, Italy
* Successfully raced in Italy in 1980s and '90s
* Currently located at our office in Charlotte, NC

The previous owner took delivery of the 1959 Alfa Romeo Giulietta Sprint in May of 2014. He imported the car from Brescia, Italy where it was being sold by Crisiano Luzzago on behalf of a long-term client Valter Colossi of Brescia, Italy.

Signore Colossi owned the Giulietta Sprint for over 30 years. He was a gentleman driver in the 1980s and '90s and during that time he raced the Giulietta including at tracks like Monza very successfully. He had the engine built by the Scuderia Italia team and when the previous caretaker took ownership of the car in 2014, he was told there were about 7,000 kilometers on the engine since rebuild. The engine runs dual Weber 40 carburetors and per the report of Sig. Colossi makes about 127hp with over 200km/hr possible at full revs.

Since taking delivery of the car in 2014 the previous owner did the following:

The Giulietta Sprint 750B was serviced by both Vintage Racing Services of Stratford, CT and Dominick European Car Repair in White Plains, NY. Both reputable shops know the car very well.