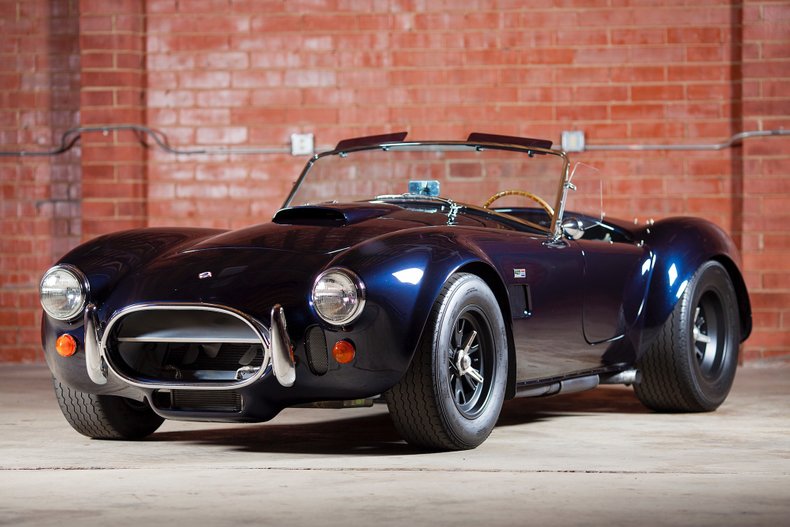 *Currently on auction with our friends at Bring a Trailer: https://bringatrailer.com/listing/2002-era-cobra-427-street/

This 2002 ERA Cobra was originally commissioned for a client in Connecticut and features a 428ci Super Cobra Jet V8 backed by a Tremec 5-speed manual gearbox. Chassis #620 is a faithful replica of a 1965 Shelby Cobra 427 Street model and was built in-house at ERA Replica Automobiles in New Britain, Connecticut.

ERA prides itself on creating visual clones of the original Cobras by getting all the small details just right. This obviously includes a body shape that is indistinguishable from the original, but it also includes the all-important relationship between the tires and the body for the correct stance.

We purchased chassis #620 in October 2017 from a New York-based seller that acquired this example in 2013 from its previous owner in St. Louis, Missouri. He relocated it to the Hamptons in New York and added about 1,900 miles. The Cobra comes with records from previous ownership along with the original, four-page handwritten ERA build invoice.

Mechanically the car is in excellent shape. The Ford 428ci FE Super Cobra Jet V8 engine was built by Danbury Competition Engines in Connecticut. The most recent service was an annual oil/filter change in April 2017. The motor utilizes a Holley 650 cfm double-pumper carb and features the following components:

The cosmetics of this car are in superb condition. Repainted by the previous owner in the original Audi Ming Blue, the fiberglass body holds a deep gloss in the provided images. Subtle mud flaps located behind the front wheels and a clear bra on the rear fenders have minimized chips from road debris. The chrome bumpers include hoops in the front and rear. Staggered 15" Trigo 6-pin wheels were fitted with Avon CR6ZZ tires measuring 225/60 in the front and 295/50 out back. We covered the wheels with a black coating that is easily removable, should the next owner decide to return to their stock appearance. The undercarriage and suspension also look fresh and dry, which you can immediately see upon inspection.

The interior is also in great condition, showing a life of careful use and care. The cockpit includes adjustable leather seats that have Legend-correct tracks/release knobs, as well as carpeting covering the floors, luggage compartment and trunk. A Mota-Lita wood-rimmed steering wheel and forward-facing shifter lever with reverse lockout are also present.

The dash is supported by steel pillars per the original Cobra design. Smiths black-faced gauges and Lucas toggle switchgear all function properly. A fire extinguisher is affixed to the rear of the transmission tunnel, and Crowe 5-point competition shoulder harnesses secure the driver and passenger. Conveniences include a map pocket in each door, as well as a 12V socket hidden under the dash.

With the 'real' Shelby Cobra 427 now trading at a seven-digit price, a faithful replica like this ERA Cobra represents the ability to taste the experience these legendary cars offered, but without the guilt and cost associated with owning what is now a historical artifact. With its side exhaust and no stripes or rollbar, this particular 'civilized' beast has a subtle appeal typically not associated with replica Cobras. Furthermore, it thankfully exhibits the trademark ERA fit and finish, coupled with their noted ride and handling characteristics.