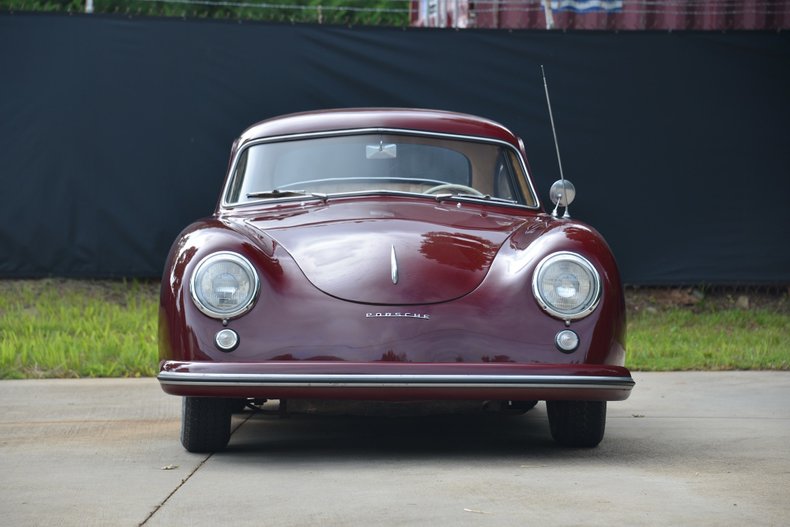 * Matching numbers 1500 Coupe
* Complete ownership history with a bill of sale from every owner since new
* One of less than 1,000 Reutter-bodied Coupes built in 1953

The example on offer here, chassis 50748, is a matching numbers 1500 Coupe sold new in September of 1953. The original sales invoice shows that the car sold to George Schwenk in Connecticut in its current color of maroon. However, an examination of its Kardex and Certificate of Authenticity states that 50748 was finished in the Ivory exterior color, contrasted with Green leather interior. This indicates two possible scenarios: 1) at (or just before) the time of delivery 50748 underwent a color change to Maroon (color code 503) over a highly unusual but fascinating tan corduroy interior that still resides in the car today or, 2) there was a clerical error within the identification of the model's build specification, which was a fairly common occurrence according to Porsche experts. Both scenarios represent striking color combinations that give the new owner two great options should they choose to restore the car to their liking.

A highly original and well-kept example, this Pre-A Coupe still features its as-delivered interior, which has mellowed gracefully. It also features its original engine and transmission per the Kardex and COA. It is known to have received one repaint in its original color in the 1970s. The body, shut and gap lines show well, but at closer inspection manageable issues in the longitudinals and jack points would benefit from attention underneath. Mechanically, the car runs and drives well with a freshened transmission and engine compression at an acceptable level. 50748 was recently serviced by Porsche experts Zuffenhaus Eurowerks, who would be more than happy to offer their thoughts on the car's condition.

Included with this highly collectible 356 is an extensive collection of documentation, which includes an owner's manual, service receipts, original sales invoice, the Porsche Certificate of Authenticity, Kardex and complete ownership history with a bill of sale from every owner since new, meaning 50748 can be bought with the utmost confidence and with little to no further research necessary to determine its history. Along with the documents, the purchase includes the tool roll, spare wheel/tire, “Porsche” script dash insert and a number of hard to find spares including carburetor air cleaners and a highly desirable set of period correct 16” wheels and tires for show and display purposes.

One of less than 1,000 Reutter-bodied Coupes built in 1953, this is a very rare find in the 356 market, and in its carefully preserved condition it is exceptional. A desirably equipped, highly original and handsome Pre-A 356, this car is a worthy addition to any collection and is ready to be enjoyed and appreciated, as it always has been.