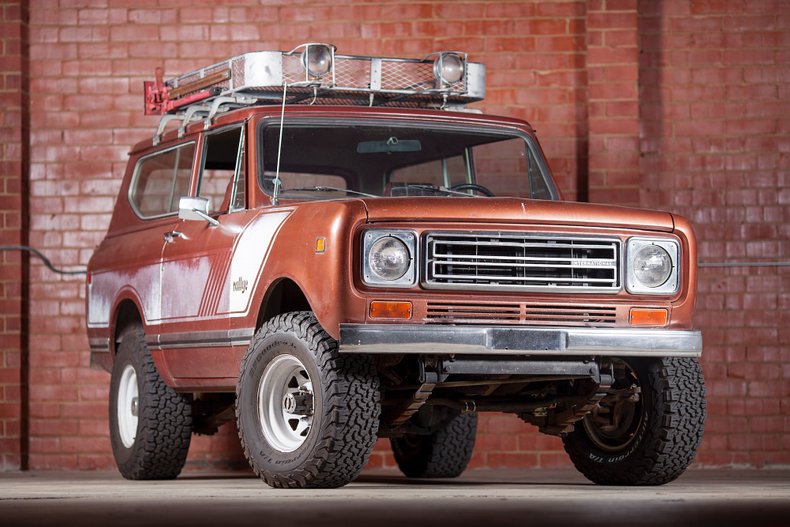 The International Harvester Scout is an on- and off-road vehicle produced from 1961 to 1980. A precursor of more sophisticated SUVs to come, it was created as a competitor to the Jeep. The Scout and second generation Scout II were produced in Fort Wayne, Indiana as two-door trucks with options of a half cab pickup or removable hard or soft top.

Scout IIs were manufactured from April 1971 to 1980. The Scout II is most identifiable by its different front grilles, with the 1978–79 Scout II sharing the same grille, three horizontal bars between the headlights and chrome rings around the headlights.

This highly-original 1979 International Harvester Scout II Rallye lived most of its life in dry Arizona. We purchased the Scout in September 2015 with a reported 76k original miles and have added 1,700 miles thus far.

While far from perfect, this Scout is an unapologetically honest and preserved example. While there are plenty of signs of use, this Scout importantly has solid floors, mounts and rocker panels, which are problem areas typically seen on examples that did not live in a dry climate like Arizona.

Powered by the sturdy International Harvester 345ci V8, this 77,600 mile Scout features the robust Dana 44 front and rear axles and a 3.73 gear ratio. Additionally, it has been been updated with an aluminum radiator and A/C compressor.

The interior is very complete, and finished with a fantastic plaid pattern on the seats and door panels. Many of the interior fittings, including the center console, are body-colored and show very well.

The Scout was recently featured on Uncrate.com: "While something like this wouldn't win a trophy at Pebble Beach, finding a Scout in this condition is nearly as rare as some of the vintage cars you'd see at the Concours."

The Scout was also featured on HiConsumption.com: "With a well-aged patina - a crackling paint job that is so lovely and authentic and utterly endearing - this car has its environs to thank for its pickle-like preservation; the dry, humidity-free land of Arizona."

This Rallye-edition Scout II represents great value in the increasingly pricey vintage SUV marketplace. Please contact us at +1-828-228-3705 or in the contact form below for more information.